Beach Games Anyone Can Play

If you are on the Cape, the beautiful sandy beaches offer an opportunity to have unlimited fun with friends and family. Cape Cod has some of the best beaches in the United States and you should take full advantage of them while you are around. Most people spend their time on the beach sunbathing, sleeping, or enjoying a cold drink. There is a lot more you can do at the beach. This article will introduce you to amazing games that you can play at the beach and have loads of fun while at it. 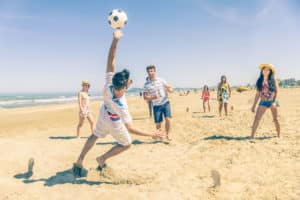 Kite flying is a perfect game for kids to play at the beach. There is vast space to run around in at the beach and there are no obstacles like rooftops and tree branches that will dampen the fun the kids are having. Also, sand at the beach makes the game easier on the kids as it cushions their fall when they trip thus reducing the chances of injury. Kites for kids are available pretty much at every toy store. If you have time, you can also help your kids make their own kites.

The beach is full of lots of interesting things children can collect when playing treasure hunt. Kids love to explore their surroundings and treasure hunting at the beach is a great way to get them to have fun with their friends. All you need to ensure a successful game is a great beach location, a treasure chest (just a simple container), and a list of treasures to find based on the age and maturity of the kids.

Every kid loves to build sandcastles when they are on a sandy beach. You can have the rest of the family join the kids in the fun of the activity. To make it an even better experience for the kids, you can teach them how to build better and more beautiful castles. All you will need to carry to the beach are water bottles for spraying the sand to keep it damp, a bucket, and small spade or spoon to help with scooping sand.

Carry and fill involves placing a container a distance from the water and having the kids use their hands to fetch water to fill up the container. The person who fills their container first wins the game. The containers must be of the same size.

A version of the game that is much easier on the kids is water bucket relay where they can use a shell, cup, or any other small container to carry the water. Kids will find the challenge of being the first to fill up a bucket in such a relay game very exciting.

Marble racing at the beach involves kids building a raceway completely out of beach sand. They then compete to see who can roll their marbles the farthest distance. The game can be made even more exciting when several obstacles are added on the raceway. It is a fun game to watch and it will get your kid’s competitive spirit going.

Drilling games basically involve kids competing on who can drill the deepest hole within a specified time frame using only their hands. You want to ensure that the kids are playing on a sandy beach with no stones to avoid hand injury. An adult or older kid should be present to help time the games. It is a great beach game to feed the competitive spirit of kids.

The general rules of indoor volleyball apply to beach volleyball. All you need is a ball and a net to throw the ball over. Beach volleyball is safer to play as the sand lowers impact with the ground and so reducing chances of injury. It is, however, more straining to play than indoor volleyball because of the irregular surface players have to walk and run over. You can play the game as a family and have kids join in on the fun. Kid’s aged 7 and older can comfortably play beach volleyball with older family members.

For a group of friends, beach soccer is a great game to enjoy on a sandy beach. You don’t need an elaborate goal post to enjoy a game of soccer. You can use anything to demark where the goal is. Even two buckets can work. If you are not familiar with the general rules of soccer, just focus on enjoying the game. You probably played soccer at school when you were a kid. The basic rules of the game are very simple and you should be able to have fun especially if you are playing with friends and family.

The beach is the perfect natural setting to play a classical game of long jump. The sand at the beach provides the natural cushion you would have to artificially create if you were playing on hard solid ground. The game basically involves players attempting to leap as far as possible from a predetermined take-off point.

This is a simple game that only needs a large play area and a bocce ball kit. These ball kits can be found at Walmart. A kit has 2 sets of balls with each set having 4 large balls. Each set has a different color – representing the two different teams playing. The kit also has a small ball called the jack that is white in color.

To play the game, you need to divide your group into two teams with a maximum of four players per team. You will then toss a coin to determine who will throw the white ball, the jack. After the jack is thrown, the two teams then throw the colored balls close to the jack. Points are awarded based on how close to the jack the ball is thrown. A throwing circle should be drawn on the ground to mark the area from which players can throw the balls. The team with the most points wins the game.

You can play Tug of war on a sandy beach or in the shallow waters at the beach. The game is pretty straight forward and the only thing you will need is a strong rope. Tug of war pits a team against another with each team pulling a rope in the opposite direction against the force of the other team. It is a fun game to play with friends and family members when you are at the beach.

To get some cardio in while having a lot of fun at the same time, a foot race on a sandy beach may be the perfect exercise or game. Sprints on a Sandy beach while barefoot can be pretty fun. Make sure that it is a beach with no small rocks that might hurt your feet. If you are feeling adventurous and energetic, you can engage your opponents on a longer race such as a 3K or 5K. You shouldn’t have a problem running a long foot race on the Cape since some beaches stretch for several miles.

Frisbee is a flying disc game that involves the throwing and catching of a disc (Frisbee). While at the beach, you will mark two end zones for the opposing teams. When one team throws the disc, the goal of the other team is to catch the flying disc. On catching a disc, a player must not move but keep one foot on the ground as their pivot. They then have to pass the Frisbee to a player on their team within ten seconds of catching the disc. Catching a flying disc earns a team one point. A game ends when a team earns a total of 15 points.

Everyone loves to play paddle ball. It is a great game to play if you are in the company of a friend or partner. The game is simple and is played between two participants – individuals or teams. The players then volley an object between them using paddles. A person loses a round of the game when they let the object hit the sand. The winner of a round earns one point. A game has five rounds and the person with the most points after five rounds win.