The Best Paved Bike Paths to Explore on Cape Cod

Cape Cod offers tourists and residents several options in outdoor activities to do throughout the year. If you are on the Cape during the summer and fall months, you should definitely bike through some of the scenic bikeways on Cape Cod. It is an excellent way to blow off steam and to see more of what the area has to offer.

There are several dedicated bikeways with many stretching through miles and miles of beautiful greenery. The air is always fresh and Cape Cod’s great weather makes rides enjoyable for people of all ages. The bikeways attract both professionals and leisure cyclists. You will see people cruising full speed in full biking gear. You will also see families riding down the trails leisurely, especially over the weekends.

The Cape Cod Rail Trail is the most popular bikeway on the Cape. It draws its name from the fact that it runs alongside an old railroad that was operational in the 1800s till the mid-1900s. It is under the management of the MA Department of Conservation and Recreation (DCR).

Stretching over 25 miles, the trail runs from South Yarmouth to Wellfleet and offers cyclists the best experience in terms of natural landscapes to see. If you bike the entire length of the trail, you will pass through the towns of Wellfleet, Eastham, Orleans, Brewster, Harwich, Dennis, and Yarmouth. It is an easy ride throughout as the trail is very well paved. DCR has done several renovations over the years to maintain and improve the condition of the trail. If you have been away from the Cape for a long time, you will definitely find out that exploring the new and improved Rail Trail is a lot more interesting now than it was several years ago.

There are great establishments along the way where people can stop for lunch, a snack, or a drink. Several hotels and inns on the Cape also have easy trail access. You are always free to move at your own pace and you can stop wherever you want.

Falmouth is Katherine Lee Bates’ native town. It is from a line in Katherine’s song America the Beautiful that the Shining Sea Bikeway draws its name. As beautiful as America is, the beauty of the bikeway and the landscapes that surround it will still impress even the most widely traveled American.

The Bikeway trails along what used to be a railroad running from Buzzards Bay to Falmouth Town. Along the way, it ran through West and North Falmouth and then curved its way around the beautiful Woods Hole. Falmouth bought the right of way and then built a long paved way along the same route. It is now about 10 miles of unhindered bike paths offering riders a chance to sample beautiful landscapes including the Chapaquoit Beach, the beauty of Woods Hole, and lots of greenery. Both beginners and advanced cyclists will like the trail.

The Province Lands Trail is a 7.25-mile paved trail running from Provincetown’s Province Lands Visitor Center to Race Point Beach and Herring Cove Beach. If you are looking to see the dune system in Province Lands, this is the perfect trail to take. Along the way, you will pass saltwater kettle ponds, exposed dunes, cranberry bogs, and marshes. The trail also passes through Beech Forest.

The hilly terrain makes the trail relatively challenging. The last two miles of the trail to Race Point Beach to Herring Cove Beach are actually extensions to the original trail. The original trail was 5.25 miles long. The city has done some renovations to make the trail more accommodating. For instance, a section of the trail that was steeply graded has been done away with and rerouted. 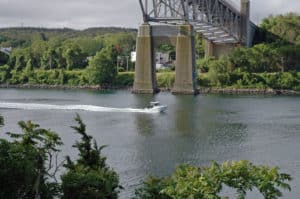 This paved road runs along the Cape Cod Canal giving cyclists amazing views of beautiful shorelines and boat traffic in the canal. Maintained by the Army Corps of Engineers, the path is only accessible to government vehicles, non-motorized vehicles, and foot traffic. It is very popular with skaters, runners, and cyclists.

The entire bikeway runs about 8 miles from the Bourne Bridge to the Sagamore Bridge. It is made of smooth concrete and since government vehicles traffic it, there are yellow markings you’d normally find on a two-way traffic road. If you have some partners you want to compete against, feel free to bring them along as the road is wide enough for competitive cycling. You are also free to take a leisurely ride by yourself or in the company of others. Families will definitely enjoy cycling on this bikeway. There are benches along the way for when you want to rest.

If you take this path, you will be treated to great views of the ocean as you approach Coast Guard Beach. The bikeway passes through acres of pine, oak, cedar, and other greeneries that add a lot of beauty to the bikeway. Mid-way, there is a bench for when you want to rest or just take in the beautiful scenery.

The bike paths in the Nickerson State Park provide cyclists with one of the most exhilarating ways to experience the area’s natural beauty and to breathe in the fresh air in its beautiful woodlands. The paths are lined with oak, pine, and fir trees. Scenic bogs and two lakes will also provide picturesque backdrops for your bicycle rides through the park. It is also very likely that you will spot foxes, deer, and various small animals.

There’s more to the Cape than just the beaches. While people are trooping to the beaches when the sun is up, you can break away from the crowd to explore the vast beauty that is Cape Cod by bike. All the long paved trails are very good and give cyclists a chance to see many beautiful types of scenery. Your ride can be as leisurely or as demanding as you’d like. Cape Cod is a leisurely place so there’s absolutely no pressure. Also, there are great establishments along some of the paved bikeways where cyclists can stop for a snack or drink.