Ice cream is a staple on the Cape during the summer.  Some people spend as much time planning which Ice Cream 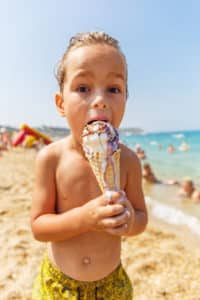 shops they're going to hit as they do which beaches they're going to.   Cape Cod has the best ice cream shops in Massachusetts and they have become very popular with both locals and tourists. If you haven’t sampled what the Cape ice cream scene has to offer, you're missing out big time.  Below are just a few, in no particular order, of the shops you should consider visiting.

They are open throughout the week all year round.

The business was started in 1976 by a school teacher who enjoyed spending the summer break on the Cape with his family. It is still run by the same family. Over the years, it has grown to become a favorite ice cream spot in Massachusetts. Food and Wine Magazine named it one of the best ice cream spots in the United States. MassLive readers have voted it as one of the best 10 places to grab an ice cream in the state.

They have a lot of flavors on offer. Customer favorites include the pistachio, cotton candy, and the chocolate peanut butter flavors. The sundaes are named after the people who have owned the store over the years. You will find sundaes called Knutty Knowles, Cranberry Crocker, Doane Cone, Dibble Dribble, and O’Boyd.

Cobies Restaurant in Brewster has been a Cape Cod tradition since 1948.  Ice cream is just one of the main offerings. This roadside clam shack is a local landmark and serves fried seafood, fried clams, burgers, hot dogs, sandwiches, french fries, whole wheat wraps, and fresh salads.

The restaurant is located at 3260 Main St, Brewster, MA just off 6A.  It's very accessible from the Cape Cod Rail Trail.  They're typically open for lunch and dinner during the spring and fall and a stay open a little later during the season.

The Somerset Creamery has a long history on the Cape that spans over eight decades. It is a family-owned business that was started in 1937.  They serve homemade ice creams that have earned quite the fan base on the Cape.

The two shops in Somerset open for the season on in mid-April while the Cautamet shop opens for the season in early April.  They are open throughout the week from 12 pm to 10 pm.

Four Seas is located at 360 S Main St, Centerville, MA. They have been serving some of the best ice creams on the Cape since 1934. Besides the great ice cream on offer, they also serve homemade sandwiches and is open every day from 9.30 am to 10.30 pm.

Ice Cream Smuggler is located at 1555 Route 6A, East Dennis, MA. They serve some of the best cakes and pies on the cape. The homemade ice cream cakes consist of layers of chocolate cake, hot fudge, chocolate cookie crumbles, and ice cream. The cakes are frosted with fresh whipped cream. Hot fudge, whipped cream, and candies are used as decoration.

Twin Acres Ice Cream Shoppe has a shop at 21 Route 6A, Sandwich, MA. The shop sits on a large spread of land of about 2 acres. They are open every day from noon till 10.00 pm during the season. They serve sundaes, shakes, and freezes. Their menu also has hot dogs, sausages, lobster rolls, and lots of soft drinks.