It is amazing to see how many people get excited at the idea of taking ghost tours of Cape Cod’s haunted properties. Humans may be more curious than cats after all. We are fascinated by the strangest things. 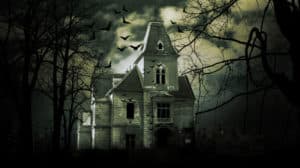 If you love spooky experiences, there is no better place in Massachusetts than Salem but the Cape has some spooky stuff too that will get your heart pumping.    Tales of people who refused to leave their residences after death are common here. The ghosts show up at unexpected times and there have been reports of some people spotting these beings during tours. Some people say they have witnessed light bulbs go on and off and chairs rock back and forth when there was no visible person initiating these actions. Some people even say that they have heard footsteps of ghosts in some Cape Cod properties.

Tour guides are well conversant with the history of properties of interest and the enthralling tales that have accompanied these places over the years. Such pieces of information are not just a small add-on to the tours but they are actually what give the tours life. Choose a good local ghost tour company to show you around to enhance your experience.

The Barnstable House has a reputation as one of the most haunted houses in Cape Cod. It is aptly referred to as the House of 11 Ghosts. It has a long history dating as far back as 1713. It is said that the house was originally constructed in 1713 in Scituate, Massachusetts. In 1716, the house was transported by barge to where it is right now.

Records show that the original resident, who also built the house, was James Paine (1665-1728). Pain is the grandfather of Robert Treat Paine, a notable American figure who participated in the signing of the Declaration of Independence. When James Paine died, half of the property was inherited by his widow, Bethia, while the other half went to other heirs.

The Paine family would later sell the property to a man named Edmund Hawes. Mr. Hawes would lose his fortune with a Continental currency. The loss took a toll on him and he committed suicide by hanging himself from a nearby tree. The property would pass through various hands in its history including the hands of a very peculiar doctor called Samuel Savage. When Dr. Savage died, the property was passed on to his daughter Hope Savage Shaw who was married to the Chief Justice of the Massachusetts Supreme Court, Lemuel Shaw. Hope Shaw is also the stepmother-in-law to Herman Melville, the author of Moby Dick. It is said that portions of Moby Dick were written in the Barnstable House.

There are 11 entities haunting the property. The most notorious entity is a small girl known as Lucy. Lucy drowned beneath the property while trying to retrieve a ball from a spring flowing under the house. People have reported seeing Lucy around the property with a blue ball. When the Barnstable House was being used as a restaurant, some people reported that they saw Lucy skipping around the dining room area. Lucy’s mother has also been spotted on the property. When Lucy died, it is said that she was hopeful she would return. She has been seen sitting on a rocking chair still waiting patiently for Lucy’s return.

Edmund Hawes who hanged himself after losing his fortune has also been spotted on the property. Another entity that people report seeing frequently is a woman called Martha. She dresses in a white gown with a white-collar. Three firemen said they saw her standing by a window. When they went over, she was gone.

After World War II, the building was renamed to Orleans Inn and started operating as a legitimate hotel. The new operators would earn back the reputation of the building. The building was taken over in 1996 by Ed Mass and family. Ed Mass chronicled the appearance of ghosts in the building in a book called Ghost of the Orleans Inn.

The ghost in the building is believed to be Hanna who was a prostitute during the building’s darker historical period. It is said that Hanna was shot on the property by a mysterious gunman. Ghost Hunters have visited the property to investigate the ghost reports. The episode is called ‘Inn of the Dead’ (S06E08). Jason and Grant of Ghost Hunters personally investigated Room 5 and they heard an unknown woman scream in the building.

The house sits right across a cemetery in Plymouth. The first Massachusetts hanging is said to have taken place on this property. The house is scary as there are spots in the property where temperatures are way higher than the rest of the house. People say that they have heard a child sing erratically and wail in the attic. People have lost their wallets and keys in the house and never found them again.

The house can be found at 1603 Main Street. Capt. William Burgess and his wife Hanna Rebecca lived on the property. Capt. William died aboard a ship after an illness. His wife would then live in the property alone for 63 years until her death. She refused to leave the property even after receiving 50 wedding proposals after the death of her husband. It is said that Hanna’s spirit still lives in the house. Her footsteps have been heard in the house and some people have seen the artwork being moved around the property.

This is the oldest inn in Cape Cod and it is haunted. There are at least two ghosts in Old Yarmouth Inn. The inn was started in 1696 but the first encounters with ghosts were reported in 1999. It was the ghost of a mild-mannered man wearing a blouse. In 2002, a guest at the inn reported that a ghost sat on his bed and then shook the bedposts.

Light bulbs and appliances at the property have also been reported to turn on and off by themselves. Guests have also reported that their objects have moved to different locations when no one else had entered the room.

The property has had several residents over the years. It is speculated that a female ghost at the property is the ghost of a woman who died in a fire in the house. Some people also speculate that she is the slave woman who was the mistress of the owner of the house at the time. This speculation is informed by the event when a male guest was awakened by a ghostly form sitting by the bedside. Scared, the guest hid under the covers. The ghost then proceeded to give the guest a foot rub. Such a foot rub would be normal at the time in history when the slave woman was alive.

Some recent activities at the inn also confirm the presence of ghosts. Staff members have heard their names whispered by unknown persons. A guest once came down to the kitchen to get coffee in the morning. She couldn’t figure out how to open the door and she suddenly heard a voice from nowhere tell her to ‘push!’

Dead of Night Tours takes people visiting Plymouth on relaxed walking tours through some of the town’s most storied properties. The tours are well run and are suitable for the whole family. You can bring kids along for the tours.

The most popular package they offer is a 90-minute walking tour that will take you through some very interesting streets. You will hear accounts of real encounters with ghosts and visit the properties where paranormal activity is spotted most frequently. Also, you will be taken through what is the original spot where Plymouth’s Pilgrims were buried and the Town Square that was cursed by King Phillip.

2-hour tours usually include admission to more properties and will cost you an extra $5. Expect to pay around $20 to join such a group tour. Some of the properties that Dead of Night takes its clients to include the 1849 Trask Museum Building, 1725 Captain Taylor House, and Burial Hill Cemetery. You can also join history tours that will take you to Plymouth Rock, The Pilgrim Maiden Monument, Leydeen Street, Burial Hill, the Town Square, Brewster Gardens, Coles Hill, and Mayflower II.

Provincetown Ghost Tours has been around since 2006. They have experienced guides who are very knowledgeable about Cape Cod, its history, and the background information about some of Cape Cod’s spooky buildings.

They organize nightly walking tours from Thursday to Monday. The tours last about 90 minutes and you will be taken to Provincetown’s cemeteries, inns, and historical buildings. You have to call ahead of time to make a reservation to join a group. You will probably be turned away if you just show up on the day of the tour. One of the reasons they do this is because they want to keep their tour groups small and intimate and so give tourists a chance to have a more fun experience.

On the day of the tour, you will join other members of the group at The Coffee Pot, 315 Commercial Street, Lopes Square. The tour starts at 9 p.m.

The Barnstable Village’s Ghost Hunter’s Tour is run by Cape and Islands Paranormal Research Society. The organization educates and informs the general public about paranormal phenomena using facts and information gathered scientifically through their own efforts or in collaboration with other researchers and authors.

If you don’t want to join a group and like the idea of you and your partner having your own tour guide, you can take the I Love You to Death Tour. The tour lasts about 90 minutes and is slightly pricier than the first package.

Cape Cod’s ghost tours will give you a chance to walk through some of America’s oldest streets and properties. The town has a rich history with some of its buildings dating as far back as the 1700s. Interestingly, the ghosts of some of these properties’ residents still inhabit them. A haunted tour of Cape Cod is, therefore, one of the best tours someone interested in Paranormal activities can have.

Aside from the paranormal, Cape Cod has other interesting events and activities that you can enjoy on a solo or family vacation.